The dominant position of the English language throughout the world and its predominance in the economic and cultural spheres of activity have led to the spread of linguistic unification, which can be denoted by the term “cultural neutrality”, also in the field of communication and information technologies.

This phenomenon has a direct impact on the modern translation industry as well. To avoid technical risk and possible malfunctions during operation, translation of all technical specifications for equipment, service manuals and other documents must be carried out without any deviation from the original text.

Translation of technical documentation requires the translator to follow the original text as closely as possible and literally transfer its meaning into the target language. To ensure the consistency of the terminology of the translated documentation, automated translation methods are often used.

Although, until recently, cultural filtering affected all subject areas of translation, today many translations, for example, in a pair of English and German, are characterized by a change in linguistic norms in favor of English. This trend leads to the emergence of numerous German-language texts translated from English, which are culturally neutral and bear the imprint of the Anglo-Saxon language. In addition, such translations are distinguished by a variety of text constructions that are absolutely uncharacteristic for the German language.

This situation could well become an explanation of the fact that recently, against the background of such unification, automated translation methods are increasingly used and the involvement of special translator programs in the translation process gradually reduces the human factor to nothing. Of course, such a tendency takes place, but it is explained by other reasons and operates only within certain limits. One thing remains indisputable – both before and now, a first-class translation can only be performed by a qualified translator for whom the target language is native. 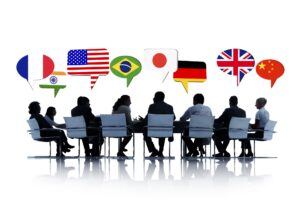 Today, various TM (Translation Memory) systems are widely used to reduce the cost of translations. These TM programs make it possible to reuse segments of previously translated texts, but these programs should not be confused with translation programs used to produce automatic translations, the quality of which is poor. Therefore, the human factor should be given its due and it should be remembered that an experienced project manager is just as important as a native speaker translator. The language is constantly changing, and its development is complex, so working with the language should not be limited to the use of computer technology alone.

Along with the predominance of the English language, there are other trends in the development of the world’s spoken languages. An example of this is the dominant position of the Chinese language in Southwest Asia, which also has a direct impact on the English language spoken in the region. Cultural neutrality in all areas of translation activity is unrealistic, because as soon as a particular language strengthens its position in the world, the variants of this language begin to undergo various changes on the territory of a particular country in accordance with its cultural foundations. The continuous process of language development is a guarantee that in the future, not automatic programs will be in demand, but intelligent experienced translators who will be able to translate in accordance with the specialization and market requirements. And this means that even in conditions of powerful technical progress, the profession of a translator will always be among the most demanded.